You are here: Home » Sweet Talk » FIGHT LIKE A MAN! 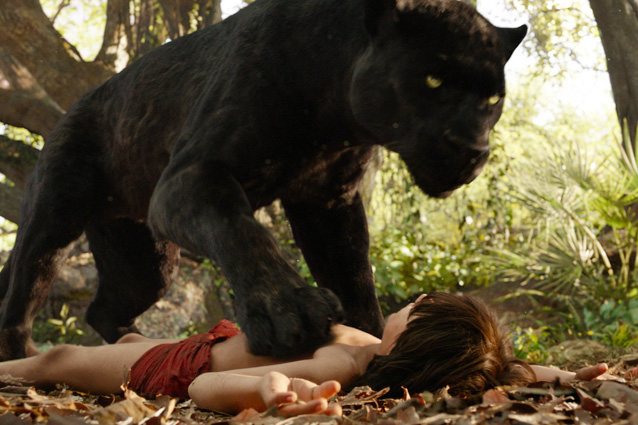 These wise words come during a fierce battle from the brave black panther, Bagheera, to his young charge, man-child Mowgli, in Disney’s live action, The Jungle Book. The special effects were gorgeous and bigger than life, and the story was funny, sweet, scary, and satisfying.  I LOVED IT!

Who doesn’t know the classic Kipling story? As a toddler lost in the jungle, little Mowgli was rescued by the big cat who entrusts him to a family of wolves. His wolf parents are brave and caring and Mowgli has become “theirs”, an adopted member of the pack. He grows up in the jungle, swings on vines, and lives peacefully with all the other animals.

But Mowgli is often troubled; although welcomed by the wolves and part of their family, he walks on two legs, not four, has attributes that set him apart, and talents they don’t.

He can weave ropes, draw water from the stream with buckets he made from half-shells, and figure out ways to get the high-hung honeycombs that his big bear-friend, Baloo, can’t reach.

They call Mowgli’s human skills his “tricks.”  Mowgli wants to fit in, but he knows he’s from the tribe of Man—feared by most of the jungle residents—and not an animal like them. The movie poignantly shows that, despite his being different, he is well loved by all.

One day the evil tiger, Shere Khan, with a vile hate for Man and particularly for Mowgli, arrives in the jungle to hunt Mowgli down. Shere Khan tricks and terrorizes the other animals with his cruel prowess, leaving death and fear in his wake.  No one can stand up to the brutal bully!  But when Mowgli learns that Shere Khan has killed his wolf Father, he gets the courage to take on the terrible tiger.  In a terrifying showdown, the other animals stand with Mowgli and together they advance, barking, growling, and howling.

Mowgli also howls like a wolf and runs bravely toward the tiger, but his faithful protector—Bagheera the panther—steps in front of him and pins him down.  Bagheera knows that little Mowgli will be easily crushed unless he draws on his unique skills as MAN.

Mowgli immediately realizes he needs all his human “tricks” to outsmart the tiger and he jumps back into action in a much different way than the wolves.  I won’t tell you anymore. Go see it.

And my point is? We are all very different in our natural temperament from others; we should embrace, respect, and value the gifts in those differences.

I always wanted to be like my peaceful Phlegmatic mother, but I was not. I wanted to fit in with the rest of my family who were serious Melancholies, but I was a lone, silly Sanguine. They sometimes yawned and laughed at my “tricks” and for years I carried confusion and shame about it.
Whether introvert or extrovert, optimist or pessimist, wild or calm, each of the four temperaments reflects something of God himself. Click To Tweet

But I found freedom in these truths: whether introvert or extrovert, optimist or pessimist, wild and energetic, or calm and careful, we are all unique reflections of something of the goodness, beauty, and truth of God himself.  We complement and need each other!

Want to learn what your greatest temperament “tricks” are?  Buy the book here.
How about a fun and informative Day of Retreat to help improve all your relationships?