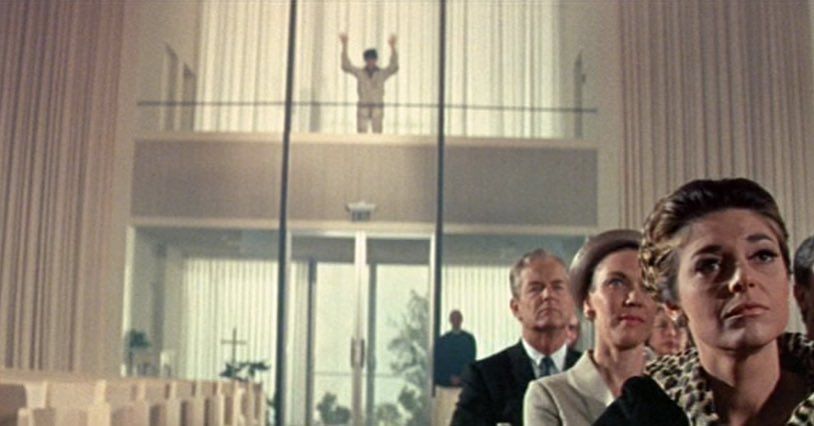 In 1967’s The Graduate, I’ll never forget Dustin Hoffman (Benjamin) sprinting breathlessly to the church and then banging furiously on the glass wall to stop his love Katharine Ross (Elaine) from getting married to someone else.

It’s one of the most dominant movie wedding cliches; the couple is about to marry, and the minister says:

“If anyone can show just cause why this couple may not be lawfully wed, speak now or forever hold your peace!”

Suddenly, the bride or groom’s true love bolts in to stop the huge mistake about to happen.

This dreaded invitation is from the marriage section of the Anglican Church’s Book of Common Prayer, first published in 1549. Over the centuries, it has worked its way into many Christian wedding liturgies.

Although you’re not likely to hear it today, the Catholic Church does still encourage anyone who has a major and legitimate objection to the impending exchange of consent (marriage) to speak up.

Why? For the long-term sake of the couple, the community, and the sanctity of the marriage bond.

What if you are worried about someone’s marriage?

It may be none of your business but, then again, it may be exactly your business. No one likes to ruin the “happy occasion,” but you are not happy because:

Some are quick to say, ”Who are you to judge?” Don’t let that stop you from using your God-given capacity to see when something is wrong and needs to be addressed.

I’ve seen disasters about to happen

For many years I’ve worked at my local parish and in dioceses around the country in (a) marriage preparation, (b) divorce healing ministry, and (c) assisting both parties (Petitioner and Respondent) in annulment cases.

I’ve also authored a book that many have found eye-opening in understanding the reasons the Church can and will declare a marriage bond “null.” It all goes back to some serious defect in the relationship present on the day of their wedding.

We all call them “red flags.”

When these become known or obvious, most people believe they have no right or obligation to address, guide, or counsel the parties. They fear conflict, judgment, or losing or ruining relationships.

So they remain silent. But we may have a moral obligation to say something, somehow. Would you stay silent if you saw someone you love about to harm themselves or others?

The Church guides us in this

The Catholic Church’s Canon Law says the pastor has the burden of doing his best to ensure there are no obvious or known impediments to the marriage:

CHAPTER I. PASTORAL CARE AND THOSE THINGS WHICH MUST PRECEDE THE CELEBRATION OF MARRIAGE

Can. 1063 Pastors of souls are obliged to take care that their ecclesiastical community offers the Christian faithful the assistance by which the matrimonial state is preserved in a Christian spirit and advances in perfection.

Can. 1066 Before a marriage is celebrated, it must be evident that nothing stands in the way of its valid and licit celebration.

And the faithful—that’s all the rest of us—are obliged to speak in the best way we can:

Can. 1069 All the faithful are obliged to reveal any impediments they know about to the pastor or local ordinary (bishop) before the celebration of the marriage.

With no evidence to the contrary, the Church presumes both parties have the right intent and capacity for marriage and will not refuse it to anyone without “just cause.” But you may have information others do not.

The good Lord has given you three beautiful gifts: intellect, intuition, and instinct, and you are given his graces to use them wisely.

Here’s what you can do to help

It’s not a good idea to holler out at the wedding, but there is something you can do before:

Write your concerns in a letter, date and sign it, give it to the pastor, and ask that (a) he read it, and (b) that it at least be placed into the couple’s wedding file.

Pastors have a responsibility to counsel, encourage more time for the couple, or even stop the wedding in serious cases. But you are never responsible for what the pastor does or doesn’t do. Do your part and trust God.

I know that the (groom) never wants children.

Give a specific, clear example:

I heard him say that at a Christmas party to my son, two months before they were married. He wasn’t drunk. “Kids are a drain. We are never having them. I told her she’d better stay on the pill.”

When I asked my daughter, she broke down and cried, admitting that he told her to abort if she ever got pregnant. But she does not want to believe it and told me she thinks time will change him. I think she is extremely desperate right now and afraid to break off the wedding.

Who knows what the future will hold?

Will the groom change his mind? Maybe.

We all hope, prepare, and pray for the best. But if the marriage implodes years later, and one party seeks a Declaration of Nullity, there will be your detailed, documented witness testimony in their file as to some of the serious problems/ concerns present at the time of consent.

Part of the difficulty with annulments is that—years later—witnesses do not recall details or conversations. Maybe they have since died. Or the parties, consumed with shame or secrecy, did not tell anyone of the unbearable and disordered goings on in the relationship back at the time of the wedding or in the earliest years.

If you are in this position, especially if you are a parent, sibling, or close friend, prayerfully consider how you can help. Contact me if you need guidance.

And if you are the bride or groom, you can also write out your most shameful or embarrassing fears and reservations, sign, date , and seal it and ask that it be put into your marriage file. Or give it to a trusted family member or friend to hold indefinitely.

Jesus promised that the Truth would set us free. He didn’t say it would be painless.

Have courage and speak now.

Still have general questions? Call me. I’ll get back to you shortly.

NOTE: Relationships? Boundaries? Personal goals? Coaching is about making a workable plan to get you where you want to be!

The key is integration; I accompany you into the interior life for the purpose of integrating Catholic truths into your day-to-day dealings and relationships. I draw from our Catholic principles, Scripture, the lives and writing of the saints, and more to give you effective tips, tricks, exercises, and tasks.

We all have some mental and emotional struggles. Coaching is not licensed therapy; if you have moderate to significant mental health issues including high anxiety, ongoing depression, addictions, and the like, I will recommend appropriate, outside, professional mental health support as part of your plan.

Still have general questions? Call me. I’ll get back to you shortly.

NOTE:  Relationships? Boundaries? Personal goals? Coaching is about making a workable plan to get you where you want to be!

The key is integration; I accompany you into the interior life for the purpose of integrating Catholic truths into your day-to-day dealings and relationships. I draw from our Catholic principles, Scripture, the lives and writing of the saints, and more to give you effective tips, tricks, exercises, and tasks.

We all have some mental and emotional struggles. Coaching is not licensed therapy; if you have moderate to significant mental health issues including high anxiety, ongoing depression, addictions, and the like, I will recommend appropriate, outside, professional mental health support as part of your plan.

Our Lady of Good Counsel, pray for us.

Our Lady of Good Counsel, pray for us.