You are here: Home » Sweet Talk » AN ANGRY, UGLY MOB 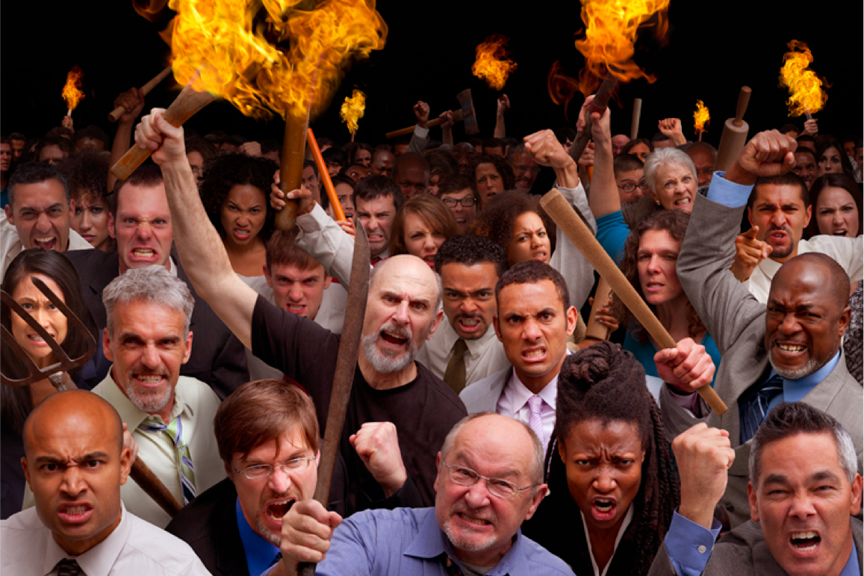 Imagine a man got drunk, then angry at his wife, slapped her hard across her face, made the kids cry, kicked the beloved family dog, and then tripped down the stairs and gravely injured himself. His actions hurt the whole family, but the nurses and doctors at the hospital care less about what he did than what it takes to immediately stabilize him and get him back to health. He has that right.

During the intake interview and while he is in ICU, the doctors learn of his abusive behavior, but they don’t deny him the immediate help and ongoing care he needs.  They eventually also call the authorities who will help him and his family later deal with the grave relationship issues. It will be a long, slow process of healing and maybe there is permanent damage . . . in both the man’s body and in his family.

This is an analogy of what sometimes happens in marriages. The damage may be great and when there is a civil divorce it may indeed be one person’s “fault”. But Pope Francis has reminded us the Church is a “field hospital” and regardless of who caused the marriage problems and who is at fault, the doors need to be open to everyone who is bleeding. Even the sinful spouse who had the affair, lost all the money, or who simply ran away because it was too difficult.

The Catholic process of seeking a Decree of Nullity (incorrectly but commonly called annulment) happens after the damage is done. As part of the search for truth and healing, one or both parties approaches the Church to ask that she take a look at their marriage and determine from the facts and the long history if there indeed was ever a valid marriage bond to begin with.  It is a long and painful process that can also be healing and bring about real conversions. This infuriates those who mistakenly think the Church is dismissing the permanence of marriage and blithely letting people off the hook.
With words as weapons, some brandish brutal accusations, hurling nasty names at the Church and those involved in the annulment process. Click To Tweet

I often hear the jeers of an angry and ugly mob of some Catholics (and others) who are woefully ignorant of the truth of the annulment process, or at the least of the private lives of those who have obediently and faithfully submitted themselves to it.  With words as weapons, they brandish brutal accusations and hurl nasty names at both the Church and those who help in the annulment process.  I wonder, do they already hate the Church or clergy for other reasons? Do they resent that they have to work so hard in their own difficult marriages, while others seem like they get to leave “scott free”? Did their parent abandon their family when they were young and get an annulment? I suspect behind their anger is great fear. Regardless, I am ashamed at their lack of love.

Have there been abuses of the annulment process? Of course, but so has there been bad medicine and illegal goings-on in hospitals. These are not the norm, and the norm is needed more than ever today.  Marriages are sick and falling apart because the culture is pandemically infected with delayed adolescence, entitlement, narcissism, addiction, and all manner of grave disorder.

No one has held the permanence and sanctity of both natural and sacramental marriage higher and more stalwartly than the Catholic Church.   Sadly, she may end up being the last to uphold marriage, but she is trying to be the first to say to the divorced, “We care. We won’t change Church teachings because we got them from Christ; they are the “medicine” you need to give you what you most deeply desire. But we will be working to improve our intake procedures and get you back to health as quickly as possible. We hate divorce . . . but we love you.”