You are here: Home » Sweet Talk » THE ULTIMATE ROMANCE

True confessions: I once—and for too long—pursued love, romance, (and yes, sex) with a vengeance, trying to find meaning and happiness. In that regard, I’m just “one in a million” who was blind to the beauty of true romance. Most thankfully, my True Love never took his eye off me. He patiently pursued me with a vengeance, and I finally let him make me his.

So today I am truly celebrating! On this Feast of the Sacred Heart of Jesus, come with to explore not just sex but the crazy-good hidden mystery of it. The union of man and woman is not just a romp in the hay, but “profound” according to St. Paul (Eph 5:32). It points us to the tender, life-giving embrace of Jesus with his bride, the Church. Of God and the human soul. A God who pursues us, woos us, and wants to fill us with his divine life.

One of my favorite modern “saints” is Archbishop Fulton Sheen, who I watched on black and white television when I was a young girl. He shares his own thoughts (and quotes St. Augustine)  on this spousal imagery, one witnessed by many saints and mystics who came before him, saying:

Now we’ve always thought, and rightly so, of Christ the Son on the cross and the mother beneath him. But that’s not the complete picture. That’s not the deep understanding. Who is our Lord on the cross? He’s the new Adam. Where’s the new Eve? At the foot of the cross. … If Eve became the mother of the living in the natural order, is not this woman at the foot of the cross to become another mother? And so the bridegroom looks down at the bride. He looks at his beloved. Christ looks at his Church. There is here the birth of the Church. As St. Augustine puts it, and here I am quoting him verbatim, ‘The heavenly bridegroom left the heavenly chambers, with the presage of the nuptials before him. He came to the marriage bed of the cross, a bed not of pleasure, but of pain, united himself with the woman, and consummated the union forever. As it were, the blood and water that came from the side of Christ was the spiritual seminal fluid.’ And so, from these nuptials ‘Woman, there’s your son’ this is the beginning of the Church.

(Through the Year with Fulton Sheen – Ignatius Press)

Hot flash! This passionate imagery is not meant to pull a transcendent, all-powerful God down into the earthly marriage bed,  but to elevate the union of spouses beyond our terribly limited (mis)understanding. 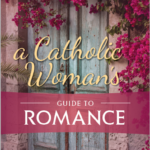 Love, romance, and sex between husband and wife—in all its wild, passionate longings—is meant to be a great and powerful mystery, a sign, and a sort of participation in something divine. Doesn’t that make you curious?  For more unfolding of this mystery…especially in the Mass!…read my book.